Musleh Maud Day will be celebrated on Thursday, February 20th, 2020 in Bait uz Zafar. The program will start at 7:00 pm with Shura elections right after the program. Dinner will be served afterwards. Please make all efforts to attend with your family.

This day is remembered as the day Hadhrat Mirza Ghulam Ahmad (as) made the grand prophecy of a Promised son.

This grand prophecy was vouchsafed unto the Promised Messiah (as) in 1886. He had been in retreat for 40 days devoting himself entirely in solitude to Divine worship and supplication. Having completed this period, he announced on 20th February 1886 that during the period of his retreat he had been honoured with the disclosure of many matters with regard to the unknown, one being the prophecy of the Promised Son.

His Love for the Holy Quran

Reliance on the Power of Prayer

His Infinite Love for the Jamaat

A Man of Great Courage 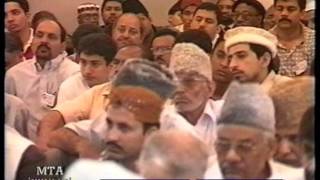